By default Divi dot navigation becomes visible as soon as the page finishes loading. The SHOW AFTER SCROLL setting of the Divi DotNav plugin allows configuring the dot navigation to be hidden on page load and appear/disappear on scroll. 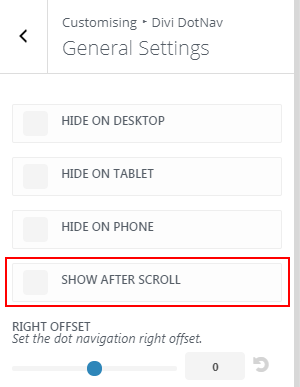 Enabling this setting reveals the SET SCROLL AMOUNT setting which is used to set the amount of pixels to be scrolled before the dot navigation appears. 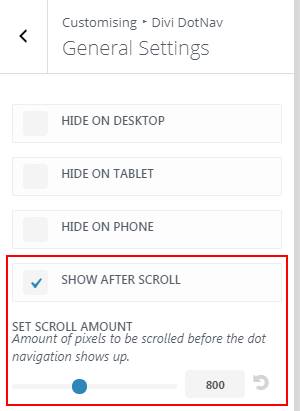 Scrolling the page back up will make the dot navigation disappear as soon as the top offset becomes less than the scroll amount set.

Did this answer your question? Thanks for the feedback There was a problem submitting your feedback. Please try again later.
Last updated on August 15, 2019